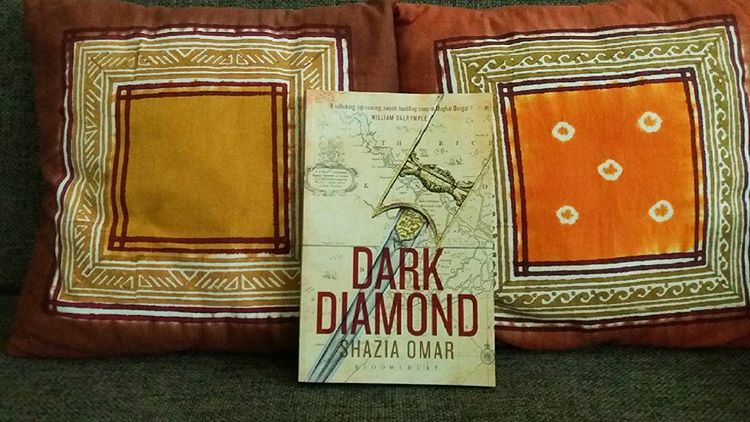 Dark Diamond is Shazia Omar’s third novel, a narration of Mughal Bengal. If you are a fan of pre-colonial historical fiction as I am, then this book would be a treat. Set in the 1680s, it tells the story of Shayista ‘Bagh’ Khan, the subahdar of Bengal and a general of the Mughal Empire. An unappreciated character in Bengal history (overshadowed by the last Nawab of Bengal – Nawab Siraj Ud Daulah), Omar paints a vivid picture of the figure.

The book is set in Mughal Dacca (now Dhaka, the city where I live yayy!!) a land of worldly pleasures and mystical magic. The superintendent of the region is Shayista Khan, the uncle of Emperor Aurangzeb, who is a fierce yet just ruler of the kingdom. The plot takes you through an epic journey as Shayista struggles to uphold the glory of his land from both internal and external forces – the religious fanatics who place themselves in the path of development (an issue we are still fighting today), Magh Raja of the Arakan Empire (present day Burma, a clever nod to our neighbour that has been a major issue in the last few decades) and of course, the East Indian Company, that plundered and looted the Sub Continent for centuries. In the middle of all this, is the crown jewel – the cursed Kalinoor, the Black Kohinoor diamond, which plays a significant part in the story that I will not discuss and give away spoilers.

The plot takes you across the mighty Buriganga River, battles with European pirates, the elegant muslin, the mystical pir-fakirs – in short, a Dacca which for some reason, does not make its way into mainstream literature. For this, I thank you personally Ms. Omar. Do not be fooled thinking it’s a hardcore fiction filled with boring historical events, because it isn’t. It is a well-researched book that recounts and showcases the tales of the great Shayista Khan, a forgotten hero of Bengal – who was a father, a warrior and a patriot.

The book ends with a note that in my opinion, signifies what Bengal truly represents – a colorful Deccan with diverse characters, where human ties are an integral part of everyday life.